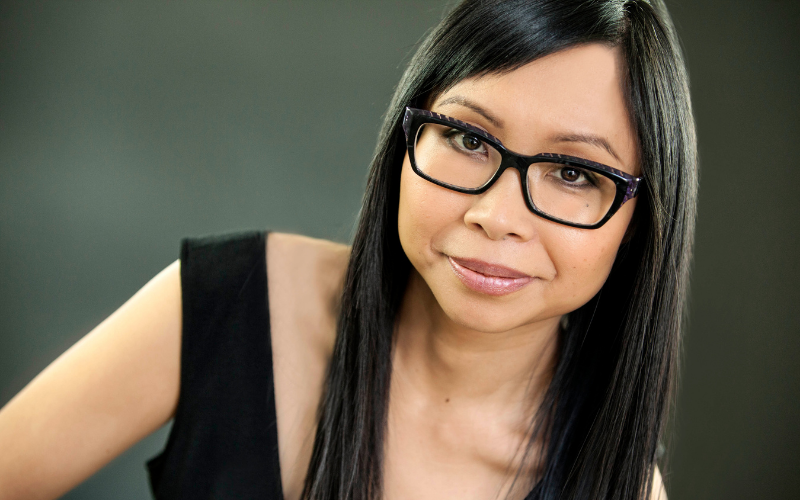 As her itinerary clearly reveals, Marie Leofeli Romero Barlizo has all the makings of a pioneer and a builder of bridges between communities. First and foremost, she proudly declares that she was the first visible minority to graduate from the National Theatre School of Canada’s English Playwriting program in 2002. It took a lot of courage and determination for this Filipino native to break into her dream profession. Marie’s parents relocated to Montreal when she was five years old, making great sacrifices to help her succeed. To them, this was not compatible with her pursuing an artistic career. Thus, Marie first studied psychology and history before getting a BA in Theatre from Concordia University in 1999 and a master’s degree in Fine Arts from the University of British-Columbia’s Creative Writing program in 2013.

The author of a dozen plays, Marie Leofeli Romero Barlizo has overcome many challenges since her beginnings, spent staging her own works as trial runs at various festivals. Various theatre companies became interested in her plays after discovering the richness and depth of her writing, as well as the authenticity of her artistic style, which is based on a physical as well as a spiritual approach to stage play. In 2017, her story UNANG PASKO SA MONTREAL was performed at the Centaur Theatre as part of the popular Urban Tales event. THE LITTLE MIGHTY SUPERHERO, a show for young audiences inspired by Filipino mythology and created for the Geordie Theatre, went on a major virtual tour across schools during the 2020-2021 season. Her play LUCKY, earlier versions of which were performed at the Festival St-Ambroise Fringe in Montreal and the Next Stage Theatre Festival in Toronto, will begin a Canadian tour in May 2022 at the Upintheair Theatre’s rEvolver Festival in Vancouver. This intense and troubling work stages an unfiltered encounter between a former skinhead and a young woman of Filipino origin. It focuses on the disproportionate expectations that children from Asian families must contend with as a result of coming from a community that suffers from the “model minority” stereotype, which holds that Canadians and Americans of Asian origin should outperform other minority groups in terms of success. These stories, according to our author, must be shared, and these struggles portrayed, in order to broaden people’s understanding of what it means to be Asian Canadian and further humanize this community.

Marie Leofeli Romero Barlizo’s Filipino and Chinese roots nourish and enrich her work. Because she recognizes the importance of sharing the stories of the Asian minority, who are rarely portrayed on Canadian stages, the playwright has endeavoured to provide them with a mirror through her plays. She is eager to depict their challenges and to create complex characters who defy stereotypes. Her work accurately and truthfully portrays these little-known social realities and issues, adding a unique and precious perspective to Quebec’s theatrical landscape.

And, as an author, Marie Leofeli Romero Barlizo is unafraid to confront sensitive topics such as shame, mental illness, or addiction. She also has the courage to tap into her family history and personal background. During her residence at the Imago Theatre, she wrote THE WARRIOR, a play based on the tragic story of her great-uncle’s family, who were victims of atrocities committed by the Japanese army during the Second World War. It is a play that promises an uncompromising viewpoint while asking the pointed question: how far are humans willing to go – particularly female characters – to survive in such a dreadful context? THE HEALING, a play commissioned by Toronto’s Carlos Bulosan Theatre, was reworked into a lengthier form with the backing of the Centaur Theatre, resulting in her first autobiographical piece and her solo debut. In this production, Marie Leofeli Romero Barlizo explores her difficult relationship with her father and their reconciliation after he nearly died of a COVID-19 infection. And for this production steeped in searing honesty, where the artist has never before been so exposed, the playwright will take the additional risk of performing it herself.

Not only does Marie Leofeli Romero Barlizo pursue her own singular path and create her own theatrical work, but she also helps shape the works of others and bring them into the world. She first accomplished this as a playwright, a valuable role which she has occupied within many companies and for several productions over the years, notably at the Black Theatre Workshop. She has been a part of this company’s extended artist mentoring program since 2015, sharing her knowledge and experience with new playwrights to help them launch their careers. In 2020, she also became a professional mentor in the playwriting program at the National Theatre School of Canada, her alma mater, where she now trains apprentice writers.

Marie Leofeli Romero Barlizo’s significant involvement in the theatre community thus contributes to the emergence of essential and diverse voices, ensuring that they will be heard.